They are James T. Brady and Francis Brockhoist Cutting ! 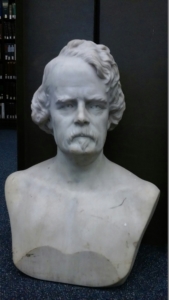 Boston Daily Advertiser (3/19/1869) news item mentioned that a James T. Brady bust would be donated and a follow up NY Times item (2/10/1870) confirmed that the Brady bust was commissioned and placed with The New York Law Institute!   The Wikipedia entry portrait looked very much like the bust that a lot of visitors remarked had a passing resemblance to author Mark Twain.

Who was James T. Brady?  Brady’s 1869 New York Times obituary describes as the premier criminal defense attorney of the day (NYT, 3/10/1869).  His most famous case was in defense of Sickles, which  was the first in the U.S. where the defendant was acquitted on grounds of temporary insanity (The Encyclopedia of New York City, 2nd Edition, page 1182. Yale University, 1995).  History of the Bar and Bench (1897) states that Brady ‘proved an active friend” of NYLI at one time served as its President (pg. 219)

And what of the bust often mistaken for Martin Van Buren?  The New-York Tribune reported that NYLI “has authorized … a marble bust of the late Francis Brockhoist Cutting. “(2/19/1897).  The same item mentions that F.B. Cutting had signed the original NYLI constitution and bylaws and was a “well-known figure in the ranks of the veterans of the bar…”.    Francis B. Cutting, related to both the Livingstons and Schuylers, served briefly in political offices as a NY State Assemblyman, NYC Alderman and in the U.S. Congress.  History of the Bar and Bench stated that Cutting was a “early enrolled a member” of NYLI and “was remembered as an intimate friend of the great leader of the bar… and a well-known figure in the profession” (p. 220). 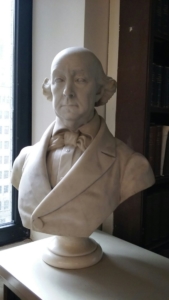 Francis Brockhoist Cutting bust currently at NYLI and photograph from the Brady-Handy photograph collection, Library of Congress, Created between 1855 and 1865.

The New York Law Institute hopes that readers and visitors alike may draw some inspiration from these men. All fame is fleeting, but with a little research, the past can be re-discovered and appreciated once again.

About the Author: Ellyssa

Ellyssa Valenti Kroski is the Director of Information Technology and Marketing at the New York Law Institute as well as an award-winning editor and author of 75 books including Law Librarianship in the Age of AI for which she won the AALL's 2020 Joseph L. Andrews Legal Literature Award. She is a librarian, an adjunct faculty member at Drexel and San Jose State Universities, and an international conference speaker. She received the 2017 Library Hi Tech Award from the ALA/LITA for her long-term contributions in the area of Library and Information Science technology and its application. She can be found at: http://www.amazon.com/author/ellyssa